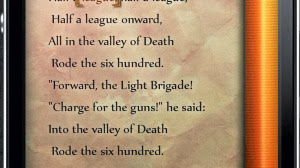 If you wish your cellphone banter sounded less like something overheard on Jersey Shore and more like an evening with Ian McKellen, then a new iPhone app developed by a team of poets, graphic designers and computer scientists at Concordia University in Montreal could be just the thing to improve your oratory flair.

The Victorianator is a game in which players score points for how well they master the techniques of Victorian elocution, from giving words their proper inflection to accenting their delivery with appropriate gesticulation.

The game has two stages. First, players have to recite a famous Victorian poem in perfect monotone as a spindly needle flickers up and down measuring how accurate they are. Next, a steampunk robot instructs the player in a series of gestures that they’ll be adding to the poem.

As the player performs the gesture, the iPhone 4’s accelerometer tracks the movement of their arm and scores them on how well they emulate the robot. A successful gesture produces a synthetic effect on the poem just recorded. So if you hold your arm out to signal a prolongation, the sound of the word will be extended.

If you raise your hand skywards for emphasis, the pitch will rise on your recording. You soon find yourself madly gesticulating and shaking your phone as your own prerecorded voice quivers in response.

The project was put together by LudicVoice, a research group led by Jason Camlot, who teaches Victorian literature at Concordia.

“Rock Band was the initial model. We wanted to do Recitation Hero,” he jokes. The team collected hundreds of examples of oratory techniques from Victorian elocution manuals and it studied the diagrams and diacritical marks that authors invented as they attempted to systematize a language of voice and gesture.

The team wanted to make a historical game, but weren’t too concerned about verisimilitude. But it was important for Camlot that all the gestures used came straight from the Victorian source material. Likewise, the effects the movements have on the voice are meant to resemble the epic intonation found in early poetry recordings from the 1890s.

“That’s why it’s called Victorianator. Through the gestures you’re Victorianating a recording. You’re triggering these synthetic vocal actions that are supposed to be modelled after Victorian elocutionary actions and you’re turning a non-Victorian performance of the poem into a Victorian one.”

The Victorianator can be downloaded on iTunes.


Special to The Globe and Mail