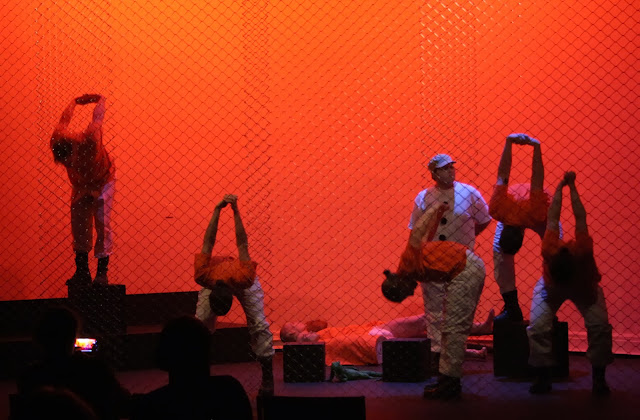 From the program to Death Clowns in Guantanamo Bay, March 21, 2013

We stayed up all night, my friends and I, reading, watching, listening to reports about Guantanamo Bay until the prison camp infected our dreams. When our dreams became nightmares, we felt we could say something about it that wasn’t just another report. We looked at the camp as foolish witnesses, as clowns who cannot tell you what goes on there, only what it’s like to be outside it, to wonder, to need to know. Guantanamo Bay is so close to the sea. The detainees hear it at night, they write about it in poems etched onto Styrofoam cups, but they are never permitted to see it. Reading the words of the detainees in translation we try to reconstruct their world in our minds like they reconstruct the sea.

Mani al-Utaybi, Yasser al-Zahrani, and Ali Abdullah Ahmed were the first prisoners to die at Guantanamo in 2006. They were former hunger strikers who had been force fed during their detention. A government report concluded that they had hanged themselves in their cells in a suicide pact. They had made mannequins of themselves using clothes to distract the guards and made nooses from their bedsheets. Their deaths were described by Rear Admiral Harry Harris as “an act of asymmetrical warfare committed against us.” A later independent investigation wondered how they had managed to tie their hands and feet together, stuff rags down their throats, climb up on the sinks in their cells, jump off and hang dead for two hours, unnoticed by guards. Another report claims the men had been dry-boarded at a secret camp, called Camp No, outside the periphery of the regular prison facility.

In this play, we do not reveal the truth about these men’s deaths, since we do not know what that is. Rather, we are telling you our story, a story about looking into Guantanamo Bay and not being able to see. A guard at Camp Delta calls Guantanamo Bay a scene “set behind diamond-shaped windows.” Guantanamo Bay: a place of secrecy. But unlike the countless CIA blacksites around the world we know nothing about, Guantanamo Bay is asking to be looked at, to be approved of, to build a community that condones torture. Sometimes it is only by looking in from an askew angle that we can see what matters.

In the spirit of secrecy and revelation, we divided into cells to create the piece. The cells worked autonomously from each other. Information was passed strategically between them. As images passed between the cells, they lost literal meaning and began to gain the kind of significance that images have in dreams. The effect is something like a collage made from poems by the detainees, songs taken from the Torture Playlist used to humiliate the detainees and keep them awake, and from the euphemistic language of the GITMO authorities. The connection we have with Guantanamo Bay is political, especially because of our government’s uncritical attitude towards it, but it is also a part of the world that our psyches must adapt to. As long as it remains open we cannot dream in peace.