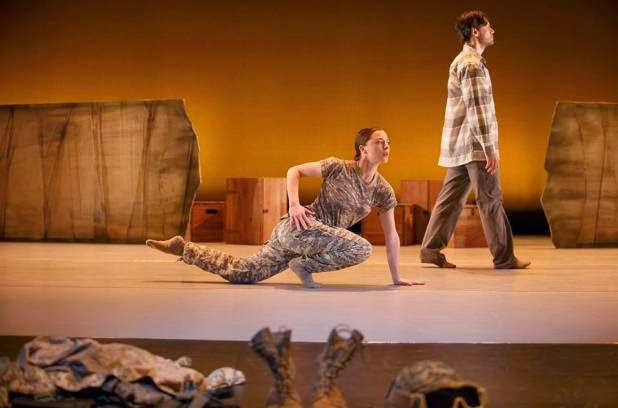 I distinctly wanted the audience to have a contemporary experience of what war is.

This year will see a number of plays about war hit Canadian stages. But whose stories do we miss out on when we talk about the nation at war? Signal Theatre’s new production A Soldier’s Tale, is a mix of dance, theatre, and live music that seeks to tell stories about communities that are often forgotten in stories of war. Its first act focuses on First Nations soldiers returning to Saskatchewan after World War II and then it jumps 50 years to the deserts of Iraq. I spoke to
director Michael Greyeyes about First Nations soldiers fighting for the British Empire, imagining Iraq today, and sitting in a trench being rained on by a firehose.

CHARPO: The show looks like an ambitious production! You have 13 performers and it incorporates dance, narrative, theatre and live music. How would you characterize the show?

GREYEYES: This piece has been in development for a number of years. It began with a conversation with a symphony based in Philadelphia that wanted to look at re-working Stravinsky’s Histoire du soldat. And I said, I’m just not interested in a story about the devil, a Judeo-Christian theme about knowledge and selling one’s soul. But I am interested deeply in soldiers and their experiences.

CHARPO: How did you get interested in the stories of soldiers?

GREYEYES: I’d just finished working on Paul Robeson’s feature film Passchendaele. Being a soldier in big budget films is extremely immersive. We go through boot camp, we train as soldiers and then the filming is often quite gruelling. You live like a soldier, you’re outside in the elements, so the immersive effect of being a soldier and thinking like a soldier made me sympathetic to a soldier’s experience. Then we immediately moved into families because families bear the brunt of soldiers’ experience. As the piece developed we became more interested in all the stories, which includes the story of the Iraqi nationals that are affected by the war. In the end, that’s where our Second Act moved. Act One is based in Saskatchewan, in approximately 1947 and examines the life of soldiers returning from World War II. But Act Two is set in Iraq.


This image of young men so far from home, fighting in Berlin and Tokyo, really inspired me


CHARPO: Why the sudden leap across time and space?

GREYEYES: I distinctly wanted the audience to have a contemporary experience of what war is. So in one sense we’re telling this story about an American soldier who lays down her weapon, takes off her uniform and begins to dance. Almost immediately we start to see Iraqi people moving across the stage, addressing the violence and then we have more US soldiers. So there’s this uneasy mix of soldiers as intruders and occupiers versus a community that’s certainly ambivalent about their presence, in some cases distrustful, in some cases deeply resentful, and the matrix of emotions is quite complex. In the end our second act really found its emotional truth in the story of the Iraqi citizens as they had to negotiate this American war.

CHARPO: The piece touches on a number of communities’ experience of war, across time as well. How did you address the trans-historical and trans-cultural aspects of it?

GREYEYES: As aboriginal people, [writer] Tara Beagan and I recognize that our people have participated in every major armed conflict in the 20rh century. Our young men and more recently our young women have played a part in all these foreign conflicts: Panama, the first Gulf War, Vietnam, World War II. It was really clarified to me as a young man through our gatherings and through pow wows where we always begin with Grand Entry and we honour our veterans, so there’s often old men in uniform. And when I was a young man I heard this song called Soldier Boy. It’s an honour song that came out of the West. The lyrics are very haiku-like, they’re very beautiful: “Soldier Boy, You’ve been frightened, Berlin and Tokyo.” So this image of young men so far from home, fighting in Berlin and Tokyo, really inspired me. I really wanted Act One to be to be a First Nations perspective of what happens to our soldiers as we participate in these conflicts that have nothing to do with us, nothing to do with our homeland. The tremendous irony of this transhistorical experience is that in many cases we were in pitched battle with our own government yet we were fighting their battles for them. There’s a paradox and not just a bit of irony in the fact that our young people were dying for a country that never understood them. I’ve always been troubled by that.

You can look back on the previous conflicts and the reasons for them vary, but the effects on the soldiers are always the same.


CHARPO: You had personal experience of First Nations soldiers, but how did you approach the Iraqi situation?

GREYEYES: Tara was always saying: “I think we need Middle Eastern blood to be part of this mixture, as part of our intercultural examination of this conflict in a far-reaching way.” But in the end, we weren’t able to do that. For me it became clear that the Iraqi people were the Indians of Act II. When I look at what’s happened to Iraqis with the Western occupation I recognize that their communities are destroyed, the occupiers are still walking amongst them.

CHARPO: Is the juxtaposition of the two acts a gesture of solidarity to the Iraqis?

GREYEYES: Not exactly. One reason that we have this two-act structure and this double time is that the effects of contemporary war are trans-generational. Looking at PTSD [Post-Traumatic Stress Disorder], for example, in World War One they called it shellshock, in World War II they called it combat fatigue. Now it has another name, it’s PTSD or operational stress. But for soldiers, war remains the same. You can look back on the previous conflicts and the reasons for them vary, but the effects on the soldiers are always the same.

CHARPO: War creates these extreme states of trauma and exhilaration. Why is dance an appropriate way to approach these states?

GREYEYES: I remember I was in Alberta, sitting in a trench, and the firehoses above us were raining water down on us. I thought, “If I want an audience to understand the physical nature of war, what soldiers are experiencing, what victims of violence are experiencing, it must be physically based. For an audience member to see a dancer hurling themselves to the floor, their breath knocked out of them, they see the sweat and they see the violence of the movement, then we move beyond language, we move into a visual fluency that allows the audience to move past politics, past the intellectual rationales, but we need to go to war, this guy was a tyrant.” It’s a kind of experiential sharing. She’s out of breath, I’m out of breath. And hopefully then I can create a stronger connection to soldiers and the victims of violence.

We wanted contemporary dance movement colliding with the images of a Cree painter.


CHARPO: That speaks well to the trans-historical or universal experience of war that you’re talking about. I wonder about the opposite: the use of distinct cultural music that is tying these specific experiences together through their uniqueness. I’m thinking of the way that at the preview of the show at the Music Gallery, John Gzowski’s music was borrowing from Middle Eastern music and First Nations rhythms and American blues.

GREYEYES: John is an extraordinary collaborator. His fluency of musical understanding is very wide. Signal is intercultural: we believe that when cultures meet each other a new borderland opens up in which the cultures are fusing, intermingling and altering each other continually. So we wanted elements of the West colliding with elements of the East and ricocheting back and forth. But I also needed that music to place us in another world. It’s not a film, we can’t use the deserts of Arizona or Senegal to put us in this other world, so I wanted the music to provide the effect of place.

CHARPO: Did you use a similar strategy with the choreography?

GREYEYES: In Act One I was looking for new ways to devise movement. It’s set in Saskatchewan in the winter and I thought, “How do I stage winter? How does movement express the austerity of Saskatchewan, my home?” So we actually went to the paintings of Bob Boyer, a Cree artist, and I gave images to all the dancers and said, “Take this and I want you to translate with your body these paintings into relationships, into body shapes, into movement.” And we developed a whole vocabulary all based on linear and geometric icons and rhythms inside Bob Boyer’s paintings. It’s coming from a deeply indigenous place. For Act Two, we used some of the same methodology. I said, “Imagine, if you look at the carpet, the clothing, the patterning and the architecture of that part of the world, there’s an ornateness which differs radically from the austerity of Saskatchewan. We didn’t have John’s music yet, so the movement emerged from the textures and the textiles of that region. And so we created a choreography that was more sinuous, more ornate, that was less linear, more circular, curvilinear. This was important to me because we were creating these two opposing worlds. So in a sense, we wanted the West colliding with the Middle East. We wanted contemporary dance movement colliding with the images of a Cree painter. There were lots of collisions, elements that we don’t imagine go together but work viscerally. I’m hoping that our work will start to trouble our audience’s perceptions about war. 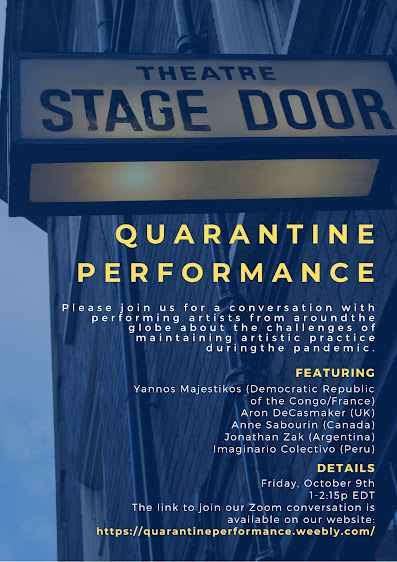